Anyone who knows me also knows my love of fairy tales. However, I know a lot about fairy tales and haven’t encountered an unfamiliar telling since reading Uprooted by Naomi Novik a couple of years ago. Until, I discovered Katherine Arden’s debut,  The Bear and the Nightingale. 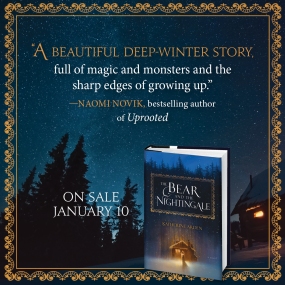 The Bear and the Nightingale takes readers on a thrilling journey to a northern village in medieval Russia where religion and magic coexist and where the long winters are cruel. When Pyotr’s wife, Marina, dies in childbirth, he tries for years to raise his children alone, including his last-born daughter. Vasya is a wild, strong-willed, “unmaidenly” girl with “fae green eyes” and the abilities of her grandmother to see magic all around her.

Then, Pyotr remarries. Anna, his new wife and Vasya’s step-mother, resists her new home’s traditions and demands that they turn from the household spirits who have protected their homes and hearths for centuries. To support her in her endeavors, Anna invites a priest from Moscow to take over the village church. With the priest comes fear that spreads through the village.

What the people don’t realize and what only Vasya knows is that in neglecting the house spirits, the village has made itself vulnerable to an old, vengeful beast that lurks in the hidden depths of the forest, a beast that feeds off fear. And Vasya may be the only one who can save them all.

Arden plots her tale with driving force and tension, especially at the end, and I found myself breathless to find out what happens next. Though this is certainly a page-turning and magical story, I admired the author’s attention to the daily lives of her characters, an important element of all fairy tales. The reader sees the homes and becomes familiar with the ways of the household, making our sympathy stronger for those characters living within.

I enjoy fairy tale retellings that challenge gender roles and norms, but it is sometimes difficult for authors to do so without removing the reader from the world they have created within the story. With Vasya, Arden acknowledges the problematic gender roles and expectations for women in medieval Russia and seamlessly challenges them by creating a protagonist who understands that ultimate freedom for women is about their ability to make choices:

“All my life,” she said, “I have been told ‘go’ and ‘come.’ I am told how I will live, and I am told how I must die. I must be a man’s servant and a mare for his pleasure, or I must hide myself behind walls and surrender my flesh to a cold, silent god. I would walk into the jaws of hell itself, if it were a path of my own choosing. I would rather die tomorrow in the forest than live a hundred years of the life appointed me.”

Although I’ve read some really good books lately, it has been a while since I finished a book and wanted more. After reading The Bear and the Nightingale, I wanted to live in the magical world Arden created a little longer. And to know more of the future in store for the strong and independent Vasya. It looks like I will get my wish. I didn’t know until today that this is the first in a trilogy. So, if you are looking for a new series, are a fan of Naomi Novik, or if you just like a good story, I highly recommend adding this magical gem to your reading list.

Many thanks to Random House, Katherine Arden, and Netgalley for sharing this magical book in exchange for an honest review.

3 thoughts on “The Bear and the Nightingale: A Review”